FORMER England U16 cap George Saunders produced a sensational eagle on the last hole to grab a vital half which set up Hampshire’s narrow win over Kent, at Hockley.

The University of Tennessee student had been two down with six to play against Conor Byers. 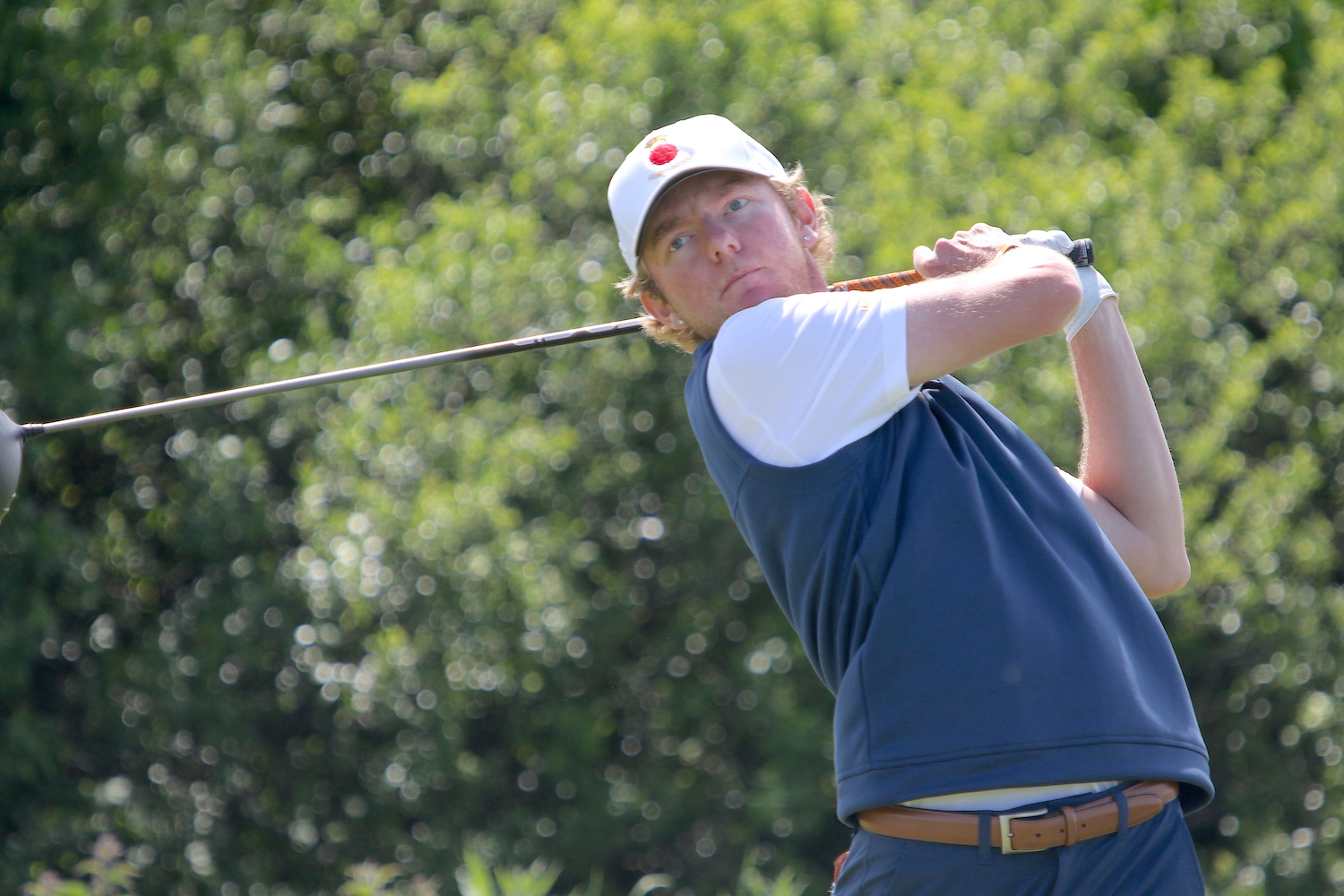 George Saunders in action at Hockley on Sunday.

Hampshire were leading 3-2 and needed at least a half from the two matches left out on the course they were trailing to stand any chance of extending their 100 per cent start to the South East League season.

Captain Neil Dawson was stood by the 18th green on the slopes of Twyford Down next to the M3 fearing his hopes of winning his first home match in charge  were sliding away quicker than a putt on that treacherous green.

The Lee-on-the-Solent GC member had been three down before a birdie from 12 feet at the 12th was followed with by a win with a par at the 13th.

Saunders left his approach to the 18th with a seven-iron some 20 feet from the pin on the right of the par five – with Byers a couple of feet further away on the left.

Kent were looking comfortable as Byers rolled up his putt for a tap in birdie – only for Saunders, who won the Delhi Cup, as a junior five years ago at Hockley, to roll in his eagle.

It left Blackmoor’s Sam Parsons coming down the 18th behind Saunders to hold on to his slender advantage against Ollie Sly, having edged ahead making a four-foot birdie on the 17th after a booming drive left him 20 yards short on the 396-yard hole.

Parsons, who also produced an important point in the opening win against Dorset earlier in May, made a birdie four, matched by Sly to win by one to make it 41/2-21/2.

And that left Dawson running up the hill towards Owen Grimes’ match which had reached the 17th green, desperately listening to the team radio for an update.

Dawson, who had been hoping for a good start to his captaincy after 2020 season was wiped out by the COVID crisis, admitted the afternoon had proved tougher than he had hoped.

The North Hants GC member said: “We thought we had a big advantage because Kent had chosen not to travel down for a practice on Saturday.

“And without the traditional foursomes in the morning because of the restrictions at the start of the league season, I was always confident that the final three or four holes would give us a big advantage.

“Driving the ball well downhill to the right spots on the fairway is key to setting up birdie chances – and we needed a couple in the end.

“I was being asked over the radio if Sam’s win had given us the match and telling me Owen Grimes was about to lose.

“But in my haste running up the hill, I was saying it was still a tie, because I had forgotten in all the commotion Darren Wright had already won his point.

“I think I have aged years in that heat running like that – I shouldn’t have let Tom Robson take the buggy,” the Hampshire skipper joked.

Dawson had been left sweating as Stoneham’s Ryan Moody found out why Kent No. 1 Ben Quinney had claimed the Lagonda Trophy, at Gog Magog, on Friday.

And Quinney, who holed the winning putt when Kent won the English County Championship two years ago, was three up after 10 holes.

The 21-year-old kept that lead until the 15th to put the first point on the board for the visitors.

By the time the eight singles matches had reached the turn on one side of chalkland course, which was very dry despite the wet May, the visitors were very much in the game.

Hampshire were up in two and down in two with the other four games all-square.

Hayling’s Toby Burden – who had been sent out by Dawson in the anchor role in the event of a close finish – showed all the authority that brought him his first Hampshire, Isle of Wight and Channel Islands Amateur Championship title two years ago.

Six-up after nine against Nick Panting was the biggest margin in the match and Burden finished on the 13th shortly after Moody lost 3&2 to Quinney.

Brokenhurst Manor’s Martin Young, playing in his fourth decade in the league, made a birdie four on the 18th with a two-putt from where, ironically, Saunders would hole his eagle.

That was enough to beat two-time Kent Amateur Champion Liam Burns by one after he three-putted from a slightly shorter distance opposite.

But former captain and new clubmate Colin Roope lost 4&3 to George Crow to make it 3-2 to the hosts.

Stoneham’s Owen Grimes, who had been the hero at Broadstone three weeks earlier, was one down with two to play as Saunders and Parsons were going down 18.

But from a poor lie after drifting a few feet from the fairway on the left of the penultimate hole, left-hander Grimes missed the green to the right and could not get up and down, losing 2&1 to Danny Jones.

Grimes, who won the Delhi twice at Hockley in 2017 and 2019 – he was at college in the States in between – looked devastated by the loss.

But the news came in that Parsons had held on for a full point, giving Hampshire a second 41/2-31/2 win in two matches.

Dawson’s team now heads to Sussex’s The Dyke – near Brighton – another windswept downland course, in June.

Victory would put Hampshire in a very strong position to reach the South East League Final, which is being staged at Aldershot’s Army Golf Club in October, with just a final home match against Surrey to come at Rowlands Castle, in August.

Hampshire maintained their winning start to the season with a narrow 4.5 to 3.5 win over Kent at Hockley Golf Club today.

For the second time in three weeks the Hampshire team had to dig deep after Kent had looked likely winners at the halfway stage.

George Saunders’ 30 foot eagle putt on the final green and Sam Parsons’ last hole victory made all the difference at the end of the day.

Click here to see the Team sheet and results.

Team of 8, singles matches only.